BEFORE:  Felicity Jones carries over from "The Theory of Everything", and I'm sorry to say this is not a film about Susan Storm Richards, the female member of Marvel's Fantastic Four - just like neither film titled "The Thing" from last October was about Ben Grimm.  I will get to that recent "Fantastic Four" film, by the way, but not just yet.  Maybe around Comic-Con time in July. 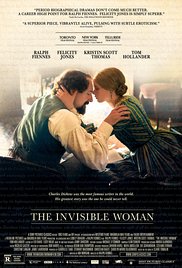 THE PLOT:  At the height of his career, Charles Dickens meets a younger woman who becomes his secret lover until his death.

AFTER:  Well, I dealt with Jane Austen and Leo Tolstoy already this month, why not Dickens?  OK, so it's not a work BY Dickens, it's about him, but whatever.  He was like the rock-star author of his time, so why should I be surprised to learn he had a mistress?   He was a famous person, so he could do whatever he wanted, right?  And now it's 150 years later, and it doesn't really matter at all.

I think that's the problem here, nothing was really done to make this relationship stand out, it was just two people who connected on an intellectual and emotional level, and then decided to make a go of it.  That just seems like such a normal, rational decision, even if he was married.  I won't go so far as to say the affair is Mrs. Dickens' fault, because this film makes it seem like she didn't even try to connect with her own husband, so that's clearly where the logic is pointing.  Sure, blame the victim.

The mother of Nelly, the young actress in question, is ultimately OK with the situation because Nelly's not that great of an actress - so at least if Dickens puts her up in a secret love-nest, she'll be financially taken care of.  Dickens' friend, novelist Wilkie Collins, is shown to have a similar set-up for his own mistress and daughter.  So I think we can conclude that Victorian London wasn't as nearly as prudish as most people believe.

This is another film with a split time-line, we see Nelly in the later sequences, when she's married to a man named George and a preacher asks about her connection to Dickens, which causes her to take long walks on the beach.  Then there are the flashback sequences set during her time with Dickens, but there's just too much jumping back and forth between the two timelines.  They should have set up the later scenes as a framing device, jumped back to the past only ONCE and let the whole story proceed until Dickens' death, then jumped back to her telling the story to the preacher.  Nothing is really gained by excessive toggling between the timelines, we gain no insight on either set of events from the other.

So Nelly lives in her "Bleak House" and helps Dickens through the "Hard Times" but ultimately this movie did not live up to my "Great Expectations".

The Theory of Everything

BEFORE: Emily Watson carries over from "Anna Karenina" to play Stephen Hawking's mum, and this is a good reminder that we're now just two days away from Oscars 2016 (which is really the Oscars for films from 2015, it does get confusing...) so it's a good time for me to catch up on the film that won for Best Actor last year.  If I really wanted to get inclusive, I could have watched "The Danish Girl", because it stars Alicia Vikander, who was in "Anna Karenina" and also Eddie Redmayne, but it turned out I didn't need the link, and I didn't really feel the need to investigate or promote the whole transgender issue - I suppose I'll see that film eventually, and I'll probably be upset if I don't have a way to link to it later on.

It may seem odd to include this film in the month of romance, but from what I understand, the film is equal parts about Hawking's science and relationship.  Umm, ships.  I think.  I do go into this knowing quite a bit about Hawking, and his theories.  I even played on a trivia team for 5 or 6 years that was named after him, but in a comic way. 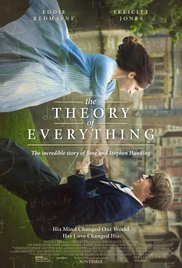 THE PLOT:  A look at the relationship between the famous physicist Stephen Hawking and his wife.

AFTER:  I've got a couple of issues tonight, but I'll deal with the cosmology first and then I'll get to the matters of story, acting and directing.

First off, huge Hawking fan, I'm immensely fascinated by the man and what goes on inside his head, illness or no.  To go back to a time when black holes were only theorized about, before their existence was confirmed, to think that he and his colleagues were making bets about whether they exist, based only on math and physics, this is something that really interests me.  And to even theorize about this stuff, when it doesn't make my head hurt, this is something that drives me.  What happens when something goes into a black hole, does it get destroyed outright, or does it survive (and start leaving messages for its daughter with the help of a tesseract?)  Hawking himself has reversed his position on black holes several times, with the latest theory being that something both gets destroyed AND does not get destroyed, so in a non-causal way it seems like the rules of space-time and the conservation of energy are getting messed with, big-time.

The film uses a great analogy to discuss the difference between astrophysics and quantum physics - potatoes and peas.  We understand the physics for really big things, like planetary motion (potatoes) but the physics for really small thing like quarks and photons (peas) seem to work differently.  The act of looking at a very small particle changes its nature, for example, so we've got issues with so-called reality on the microscopic level.  And thus Hawking was looking for one grand theory of "everything" that would incorporate the physics of the very big and the very small.  It's a great analogy, because on a culinary level you can't treat potatoes and peas the same way.  Unless you mash them, which come to think of it, might be what a black hole does to things.

Quantum physics is all about probabilities, and Albert Einstein is famous for saying "God does not play dice with the universe."  For years I thought that this meant that Einstein didn't believe in God, but now I think it's more likely that Einstein didn't believe in quantum physics.  Hawking has a similar reversal, where he at first believes that there's no place for religion within science, but by the end of the film, he kind of opens that door a little bit.  Studying the universe sort of reminds me of that parable about the seven blind men who study an elephant - the one who feels the trunk thinks that an elephant is like a snake, and the one who feels the tail thinks that an elephant is like a rope, etc.  If you get a mathematician, a physicist, an astronomer, an astrologer and a religious expert together and ask them about the universe, they're all going to describe it in different ways.

Now, as for the story - they kept with it when the main relationship between Hawking and his wife ran down, which is quite unusual for a Hollywood film.  What happens after the traditional "happy ending"?  Can a relationship survive when one person is in need of constant medical attention, or does that automatically put too much of a strain on things?  Really, it's very bold for a film to depict this at all, when in the real world people vow to stay together "in sickness and in health", yet they don't always honor this.  But if you think about the mechanics of a long-term relationship, chances are that one person or the other will eventually get sick or broken-down, so to have to watch your spouse become a frail version of themselves, unable to take care of themselves, it takes real commitment - and that's if you're the lucky one and don't become sick yourself.

Worse yet, that Hawking had to watch his wife become enamored with another man, knowing that even though he still loved her, she'd be happier and more fulfilled in the long-term with someone else.  So heartbreaking, but at the same time, he'd developed feelings for his nurse, so he just HAD to be the one to suggest that they both move on.  Still, to hear that cold, robotic voice saying "Honey, we need to talk..."   A lot of us have been there, Mrs. Hawking.

Now, the directing - much is made here of Hawking's illness, and visually there's important stuff here about him struggling to get around, but I think they knew they were on shaky ground when they started pulling a couple of visual tricks, like having Stephen and Jane watch fireworks, or enjoy the visual nature of people dancing under UV light.  My guess is that the filmmakers were overcompensating, when they knew the film would be a lot of talkie-talkie and not much would be happening to entertain the eyes.

From an acting standpoint, since I watched "The Imitation Game" last year, and "Foxcatcher" and "American Sniper" last month, I can finally comment on the 2014 Best Actor nominees, and I fully believe that Michael Keaton was robbed.  OK, Redmayne did undergo something of a physical transformation to play Hawking, but after a certain point, all he had to do was sit in a wheelchair and stare straight ahead, occasionally blinking or smiling.  That doesn't seem very challenging!  OK, once in a while he had to say something incoherent, but if we're giving out Oscars for that, then Keira Knightley should have won at least two by now!  (and if Stallone wins one this year, same deal...)

But Keaton in "Birdman"? God, he had so much more to DO! He had dialogue, he had inner conflict, he walked through Times Square in his underpants.  Don't actors love to vote for actors who play actors?  OK, so the Oscar voters also like to play the "disability" game - but haven't we seen this before?  Isn't this just "My Left Foot" mixed with "A Beautiful Mind" at the end of the day?  Just because you rewarded those films, it doesn't mean you have to reward this one.  If you want to give Redmayne an Oscar for "The Danish Girl", that's fine, go ahead.  But for "The Theory of Everything"?  No way.

Still, I'm left feeling embarrassed, because here I was complaining about having a cold, and Hawking's a man who had freakin' ALS and still unraveled some of the mysteries of the universe.  Geez, what right do I have to complain?  Hawking was given two years to live, and that was like fifty years ago, and look at all that he's accomplished since!